Europe is such a beautiful and diverse destination that you cannot experience it just once. It will definitely make you come back again. We had our first taste of Europe together in 2015 and since then all we have wanted to do is visit the continent again. It took us a little over three years but we finally made it back there.

We planned our first European trip ourselves and enjoyed the planning process so much that since then, we have planned a few more international and domestic trips for others. Planning a trip basically involves finding answers to a set of questions and here is how we set about answering those questions for our Croatian trip.

The first thing that we needed to decide was the duration of the trip. A month-long trip like our previous Eurotrip was out of the question. On the other hand, a 7-10 day trip seemed too short if we were going as far as Europe. Eventually, we decided on a 15-day trip.

During our previous trip, we had visited four countries but had explored none to the extent that we would have liked. Hence, there was a sense of unfulfillment and a desire to revisit those countries. So this time we decided to visit a single country that we could cover thoroughly in those 15 days.

It was Mansi who suggested Croatia. We were aware that Croatia had some really beautiful postcard locations like Dubrovnik and Plitvice Lakes National Park but further research suggested that Croatia fit our requirements perfectly. The country had enough to engage us for 15 days without things getting too hectic or too slow. Croatia also offered a lot of variety that included castles straight out of fairytales, coast and beaches with crystal clear water, architecture belonging to different periods and styles and gorgeous national parks. In short, it looked like a perfect blend of history, nature and architecture.

We definitely wanted to avoid the peak tourist season which comprised of July and August months. Another reason to avoid these months was the extreme heat that is not conducive to sightseeing. From the shoulder seasons, we could not go in May-June due to work which left only September. When we checked the temperature readings of previous years in Croatia, we found that the weather is still quite hot in the first half of September hence we chose the dates of our trip as 15th – 30th September.

Once our destination and dates were decided, we moved on to the booking and preparation phase. This time we needed to make bookings for four people and not just two because on this trip we were accompanied by two special people who made the trip even more memorable for us.

Which flights to book?

Booking the flights is something that never goes perfectly for us. For this trip, we had to book an outbound flight from New Delhi to Zagreb and the return flight from Dubrovnik to New Delhi. Since we had been to Europe before, we had an approximate cost of flights in our minds but when we actually searched for the flights we found the prices significantly higher.

Yes, there were cheaper options which involved Aeroflot but after the harrowing experience with them on our previous trip, we had promised ourselves never to fly with Aeroflot again. I admit that they did test our resolve with their prices but, alas, the scars of 2015 proved to be too deep. Eventually, we played it safe and booked our flight with Emirates.

Our experience with Emirates in terms of check-in, punctuality, food and in-flight entertainment was quite positive except for the Dubrovnik – Dubai leg which was operated by Fly-Dubai airlines. The in-flight entertainment in that flight was not free and the food quality was also poor. Still, the overall experience was much better than what we had on our previous trip.

Which places to visit?

A detailed day to day itinerary is very important for us because both of us are not impulsive travellers and we like to know what we are going to do on a particular day. These days, with so many travel sites, pages and blogs on the internet, getting the information for making an itinerary is easy. However, choosing and selecting stuff from that overload of information can be overwhelming.

We wanted to experience all the variety that Croatia had to offer. So, after sifting through a lot of information the places we chose for our trip were:

We booked apartments for all 15 nights and all the apartments turned out great. In fact, even our parents, who were slightly apprehensive about staying in apartments initially, loved them and declared them to be better than most of the hotels they had stayed at during their previous international visits. The best thing was that apart from a couple of apartments, all were quite economical. 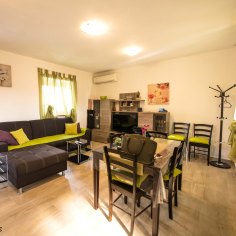 How to travel within Croatia?

During our previous trip, we solely relied on public transportation for our travel within Europe. While the trains and buses were very comfortable and punctual, there were a few instances when we felt a car would have offered us a lot more flexibility and allowed us to explore a region in a better way. Therefore this time we decided to hire a car to explore Croatia.

We checked many car rental sites, and after comparing the prices, we found that Nova Rent a Car was offering the best deal. We booked a car with them for eight days with our journey starting in Zagreb and ending in Split. In hindsight, hiring a car proved to be a good decision because we could start and end our day at whatever time we wanted. Also, driving in Croatia was an experience in itself. Furthermore, there was no need to lug our suitcases (which we had to do a couple of times after dropping our car off in Split) since all our apartments offered free parking and with four people car hire was much cheaper than public transport. We simply couldn’t have seen as much of Croatia as we did without a car.

For the journey from Split – Hvar and Hvar – Dubrovnik, we booked ferry tickets with Krilo. For the Hvar – Dubrovnik route we booked our tickets online since there is only one ferry in the morning but for the Split – Hvar route, with many options available throughout the day, we bought our tickets one day before the date of travel from Krilo kiosk in Split. Both the ferries were punctual and comfortable.

On the island of Hvar, we also rented a scooter for one day to explore the island. Again, we checked many rental sites and asked for quotes from a few. In the end, we booked with Suncity because their online prices were almost half of what others were offering. On top of it, they were giving an additional 10% discount at the time we made our booking. Our experience with both the rental companies, Nova and Suncity was very positive.

A few times when we needed cabs (airports and ferry ports transfers), we used Uber.

Any City Cards worth buying?

City cards, offered by many cities and towns across Europe, are designed to make sightseeing and travel within that city cheaper, quicker and more convenient. In Croatia, the three city cards we found worth considering were Zagreb Card, Dubrovnik Card and Pula Card. Out of the three, Pula Card was being offered only from 15th June to 15th September hence it was useless for us. The inclusions in the Zagreb Card were not of much interest to us so the only card we ended up buying was the 1-day Dubrovnik Card. We covered all but two attractions included in the Dubrovnik Card hence buying it proved worthwhile for us.

How to apply for Croatian Visa?

On the other hand, if you are only going to Croatia like us then you need to apply for a Croatian visa. The process for a Croatian visa is quite similar to that of a Schengen visa. In India, VFS handles the processing of Croatian visa and all the information can be found on its site. Applications, at the earliest, can be applied only three months prior to the date of departure. We applied for our visa 45 days prior to our date of departure and it took just 13 days for our application to be processed. If you are submitting your application somewhere other than New Delhi then your application might take longer to get processed.

Which Foreign Currency to buy?

The currency of Croatia is Kuna. I don’t think it is possible to get Kuna in India; we certainly didn’t find it in our hometown so we had to buy Euros. The only question was whether to take cash or Forex card. We were told by our friends, who had visited Croatia in June, that though they did not face any problem using their Euro Forex card in Croatia, they were charged some conversion amount for every transaction. They suggested us to take cash and that is what we did.

Well, that covers everything about how we planned our Croatian trip. If you have some feedback, suggestions, questions or you think we have left something out then please do let us know via your comments.

16 thoughts on “Bok Hrvatska: How we planned a fortnight in Croatia”