In the 11th century, two settlements emerged on the neighbouring hills of Kaptol and Gradec –the former, religious in nature, consisting of a cathedral and residence of the bishop and the latter secular in nature, inhabited by common people. After a long history of frequent battles and occasional truce, Kaptol and Gradec were officially united in 1850 and today comprise Gornji Grad – the historic core of Zagreb. This was the area that we explored during our second day in Zagreb.

Suffering from the effects of a tiring flight followed by a long walk around the Donji Grad, we got up late in the morning. After a quick breakfast, we left our apartment by 10:30. Our first stop of the day was the famous market of Zagreb – Dolac.

Established in 1930, Dolac is a bustling open-air market situated just to the north of Ban Jelačić Square. The main marketplace is situated on an elevated square with the tower of adjoining St. Mary Church looming over it. As soon as we reached the square we saw scores of people moving among stalls filled with fruits and vegetables. Most of the stalls were covered with red beach umbrellas lending a unique homogeneity to the entire market.

Apart from fruits and vegetables, we also saw colourful flowers, souvenirs, textiles, wooden handmade artefacts and locally made food products like honey and oil being sold at the market. There was also an elevator at the market whose use we understood later when we got to know that there is also a lower level where meat and dairy products are sold.

Our purchases from the Dolac Market included a couple of magnets, a tablecloth, a table runner and some fruits which were fresher and far cheaper than those available at the nearby supermarket that we had been to in the morning. After Dolac Market it was time to go to the Upper town.

THE SHORTEST FUNICULAR IN THE WORLD

There are many ways to go from the Lower town to the Upper town of Zagreb, but the quickest, most interesting and historic of them is probably the Zagreb Funicular. Built in 1890, the funicular holds the distinction for being the oldest public transportation system in Zagreb. Running on a mere 66 metres long track, it also holds the record for being the shortest funicular in the world.

The funicular is situated just off the lively Ilica Street which we reached from Dolac Market via Ban Jelačić Square. We bought our tickets (4 kn each), waited till the car got full and then in a few short seconds reached the Upper town. We got out in front of Lotrščak Tower but our visit to the tower was scheduled for slightly later so we moved on to St. Catherine’s Church.

The 17th century Zagreb Funicular was situated just a few steps away from Lotrščak Tower. The front facade of the church was quite austere but the interior was a different matter altogether. White stucco work decorated the pink walls and ceiling of the entire church with some intricate paintings, frescoes and stained glass windows adding to its beauty. The highlight of the church was a 3D mural painted by Slovenian artist Franz Jelovšek behind the main altar.

Right next to the church was Gradec Plateau – a large terrace like viewpoint with wonderful views of Zagreb cathedral and red-tiled roofs of buildings. We spent a few minutes there clicking photos and then the time to visit Lotrščak Tower had finally come. Our next 45 minutes or so, centred around Lotrščak Tower, were quite interesting as we got to see two unique ceremonies – Firing of Gric cannon and Changing of the Guard.

THE BOOM OF A CANNON & A CEREMONY OF SOLDIERS

The 13th century Lotrščak Tower was originally part of the fortifications that were built to protect the settlement of Gradec. In the mid 19th century the tower was reconstructed and a few additions were made to it.

In 1876, the city government also decided to acquire a cannon that would fire exactly at noon every day to let the bell-ringers of all churches in the city know the time. This cannon, known as Gric cannon, fired its first shot on New Year 1877. It fired daily for many years before being put out of use in 1914, with the declaration of World War I. After years of disuse, the cannon was found and installed at Lotrščak Tower and started firing again on 29 October 1927. The tradition has continued since then to this day, though the original cannon has been replaced by a much more powerful one.

As we reached the tower we saw mounted guards in traditional costumes getting ready for Changing of the Guard – a ceremony which takes place at midday every weekend.

Since we had so much to see in such a short time, we quickly bought our tickets for the tower (20 kn) and rapidly climbed its four floors. There were small galleries with photos on each floor where one can also sit and rest if needed. On the fourth floor, we saw the Gric cannon being cleaned and readied by its operator.

We climbed the narrow spiral wooden steps of the last level and reached the viewing gallery which offered magnificent 360° views of the city. From the top, we could also see that the Changing of the Guard ceremony had begun in St. Mark’s Square.

We descended the tower swiftly, so as not to miss the firing of the canon and placed ourselves in front of the tower. In a few short moments as the clock hit 12 – BOOM.

After that we walked to St. Mark’s Square to witness the rest of the Changing of the Guard ceremony which wrapped up in a few minutes.

St. Mark’s Square is the nucleus of the Upper town. In the centre of this cobblestoned square is the most iconic structure of Zagreb – St. Mark’s Church. This church was constructed in the 13th century but has undergone multiple renovations since then. The most distinctive feature of this church was its colourful tiled roof which seemed to glitter under the sun and the two crests formed by these tiles. The crest on the left was a combination of the coats of arms of Croatia, Dalmatia and Slavonia while the one on the right was the coat of arms of the city of Zagreb.

The entrance, with 15 intricately sculpted statuettes placed in niches, was another highlight of St. Mark’s Church. The interior of the church, though not as striking as the exterior, still had some nice paintings and stained glass windows.

The church is surrounded by important government buildings like the Croatian Parliament, Constitutional Court of Croatia and Banski dvori –once the residence of Croatian Bans (governors) and now the seat of the Croatian Government. This makes St. Mark’s Square the centre of Croatian political power. Walking around the St. Mark’s Square also provided us with a moment of amusement. We were trying to take a perfect shot of the Croatian Parliament when a lady with a pram came strolling in our frame. Then very casually she left the pram in front of the Parliament gates and moved away. We could never imagine this happening in India as the security around government buildings in India is quite heavy.

From St. Mark’s Square we walked towards the Stone Gate – one of the four main entrances to the medieval settlement of Gradec and the only one that has survived to this date. Currently, this gate is also a shrine and houses a small chapel that contains a painting of Virgin Mary. At the time we visited the gate, it was under renovation and most of the interior was covered hence we could not see much.

We crossed the Stone Gate and emerged on Radićeva Street where we saw the sculpture of St. George having slain the dragon. From there we crossed over to Tkalčićeva Street, famous for its restaurants and cafes, and soon reached the Zagreb Cathedral. 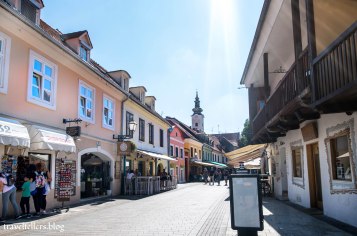 We have to admit that we were quite surprised by the Zagreb Cathedral as it was a far more imposing and impressive structure than we expected. With a height of 108 metres, the twin towers of the cathedral dominate the skyline of Zagreb city centre. The current structure, located at Kaptol Square, belongs to the late 19th century as the original cathedral was destroyed in an earthquake in 1880. When we visited the cathedral one of the towers was under restoration (apparently the cathedral is under constant restoration due to deterioration of poor quality stone used in its construction) but that had no effect on its grandiosity. Right in front of the cathedral was a fountain, in the middle of which was a high column. At the base of the column were four gilded statues of angels, while atop the column stood a gilded statue of Holy Mary. We took some photos there and then went inside the cathedral.

The interior of the cathedral was also quite beautiful, especially some of the altars and the stained glass windows. While we were discussing something among ourselves, we were approached by a gentleman who introduced himself as a professor of history at Zagreb University. His name was Zlatko, which he told us meant ‘golden’ in Croatian. He could apparently speak multiple languages including Hindi. We talked for about 15-20 minutes on many topics. He told us about various aspects of the cathedral and about Cardinal Alojzije Stepinac who served as the Archbishop of Zagreb in the mid 20th century and has a tomb in the cathedral.

Fun fact: To protect it from hostile forces in the medieval era, the cathedral was surrounded by fortified walls and towers. A small part of the walls can still be seen on one side. On this wall, there is a clock which belonged to the old cathedral. This clock stopped working when the earthquake of 1880 struck and still shows the exact time at which it stopped (7 hours and 3 minutes).

In the evening, we went to Donji Grad and enjoyed the food festival about which we wrote in our previous post. Then we had dinner in Curry Bowl – a Sri Lankan restaurant on Tkalčićeva Street and finally returned to our apartment.

6 thoughts on “Zagreb: The Sights of Gornji Grad”