We must begin this post with an apology to our regular readers (if any) because it has been almost ten months since we published our last post on the picturesque Rovinj. The reason for this delay is the arrival of a little travelteller who has completely hijacked our time. As an apology let us offer you something worthwhile.

In the Roman era, if a foreigner came to Poreč (or Parentium as it was called back then) and asked for directions to a place, he might have received an answer such as – “Go along the Decumanus Maximus street, turn right on the Cardo Maximus street and you will find your destination to the left.” Now comes the truly mind-blowing part. Today, almost 2000 years later, one might get the exact same answer to that question. This is because Poreč has not only preserved the original town layout from the Roman era, it has also retained the ancient names of the longest parallel and perpendicular streets of the town. It gave us goosebumps when we realized that we were literally walking in the footsteps of the Ancient Romans.

This kind of history, an idyllic setting beside the sea, and topping it all a 6th century UNSECO World heritage site is what entices tourists to flock to Poreč in numbers.

It might have taken us ten months to move from Rovinj to Poreč in our blog but in reality, the drive from Rovinj to Poreč was just 45 minutes and we were at our apartment by 3:15 in the afternoon. The owner of Apartments Oliva arrived soon and checked us into our two apartments on the third floor. The apartments were basic but spacious, clean and well furnished. We rested for a bit and then left to explore the historic centre of the second largest town in Istria by 5 p.m. 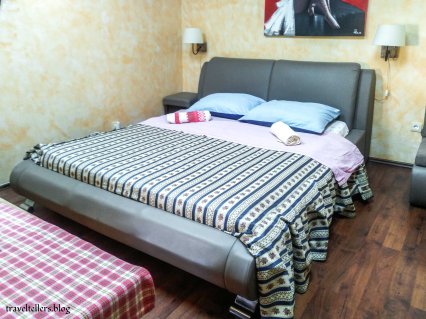 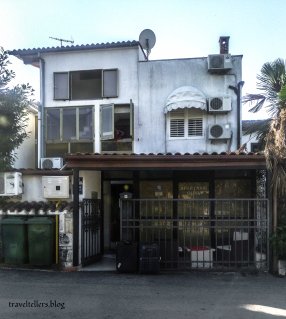 THE OLD TOWN OF POREČ

Just like Rovinj, the old town of Poreč is also situated on a small peninsula. In fact, at first glance, it looked like a monochrome version of Rovinj. But once we delved a little deeper, we found that it was quite distinct from Rovinj. While Rovinj mainly relies on its charming narrow cobbled alleys and pastel-coloured buildings to attract tourist, Poreč has many architectural sights to marvel at. Poreč is also just 100 km away from Venice by sea, hence the Venetian influence on the architecture is quite widespread and apparent.

A ten-minute walk along the coast, offering panoramic views of the old town, got us to the Freedom Square (Trg Slobode) at the centre of which stood the 18th century Church of Our Lady of Angels. This square marked the starting point of our exploration of the old town. Our first and foremost priority was to visit the Euphrasian Basilica before it closed. So, from the Freedom Square we made our way towards the Euphrasian Basilica through the Decumanus Street (yes, the one from the Roman era).

The first landmark that we came across while walking along the Decumanus Street was the Pentagonal Tower. The old town of Poreč was surrounded with walls during the Roman era. In the 15th century, the Venetians reconstructed the walls and fortified the town with defence towers. The Pentagonal Tower, erected in 1447, is one of the three surviving defence towers from that period. As the tower is located right at the beginning of the main street, its purpose was to protect the main entrance of the town. Today the tower houses a restaurant.

Just a few steps further from the Pentagonal Tower was the Lion Gothic House also known as Parisi-Gonan Palace which dates back to 1473. The old town of Poreč is full of such beautiful Venetian era family palaces and houses. The highlight of this gothic structure is the two sets of triple lancet windows. The building is now privately owned.

We quickly covered the next 100 metres to arrive at the most famous structure of Poreč – the Euphrasian Basilica complex.

In the middle of the 6th century, Bishop Euphrasius arrived in the ancient town of Poreč and began a new chapter in the town’s history. He did this by constructing a grand basilica and building or restoring some associated religious buildings like a baptistery, an atrium and a bishops’ palace. It was a stunning example of Byzantine architecture and the complex found its rightful place in the UNESCO World Heritage List in 1997. The Euphrasian Basilica complex was built on the site of two 4th and 5th century basilicas, so mosaics and other artefacts belonging to those two older basilicas and even the Roman period can be seen in different parts of the complex.

We reached the complex by 5:30 and the closing time was 6:00, hence, we had to rush through our visit which was a real shame. We started our visit from the atrium followed by the baptistery which was an octagonal building with a baptism pool in the middle. After this, we climbed the bell tower. The bell tower was built in the early 16th century and provides an amazing 360-degree view of the surrounding areas.

Next, we visited the bishops’ palace, the upper floor of which serves as a museum that displays some sculptures, paintings and other objects used by the church.  The ground floor of the palace was far more interesting as it contained archaeological remains, especially fragments of original floor mosaics belonging to the earlier 4th and 5th century basilicas. This palace was used by the bishops of Poreč as their residence and office till the end of the 20th century.

Once we exited the bishops’ palace, we came upon a large open space which was an archaeological zone. The highlight of this zone was a large replica of the floor mosaic from the central hall of the 4th century basilica. There was also a viewpoint set up on the remains of the ancient town walls.

Next, we quickly passed through the old sacristy and a memorial chapel which had some more remains of floor mosaics of the older basilicas. From the memorial chapel, we emerged into the most significant and awe-inspiring building of the entire complex – the basilica. As soon as we entered the basilica, our eyes were drawn towards the spectacular mosaics that decorate the apse. The colour and the glow retained by these 1400 years old mosaics is a testament to how well the basilica has been preserved. There were also openings in the floor of the basilica through which the remains of the mosaic floors of the older 4th and 5th century basilicas were visible at different levels.

SOME MEDIEVAL BUILDINGS AND A ROMAN SQUARE

After exiting the basilica, we spent an hour or so roaming the alleys of the town and admiring the palaces and other medieval buildings. The first of those buildings was Canonica – a Romanesque house from 1251 right next to the basilica complex. It serves as house and office of parish priests. Another important structure was the three-storey gothic Zuccato Palace which is today a gallery. Probably the most peculiar structure was the Romanesque House. This 13th century house with a distinctive wooden balcony is the oldest preserved house in Poreč. The Istrian Assembly Hall was another interesting structure. Originally built as the church and the monastery of St. Francis in 1277, this building also served as a wine cellar and town hall of Istrian assembly in 19th and early 20th centuries. Today it is used for holding various cultural events and art exhibitions.

While strolling around the town we even came across a wedding, and with the setting sun, view of the sea, sound of the waves and unadulterated history all around, we couldn’t help but marvel at this perfect backdrop for a wedding.

Some more strolling led us to the Marafor Square which was the main square or the forum of Poreč during the Roman era. Just like most Roman forums, this one also had temples around it, the fragments of which can be seen in open areas adjacent to the square.

Now that we had had our fill of architecture – ancient and medieval – for the day, it was time to slow down time and spend some moments with nature. Thus, we sat at the Dr Ante Sonje waterfront and witnessed a glorious sunset.

Once it got dark, we had dinner at Restaurant Rialto while sitting beside the sea. As we walked back, we saw some more landmarks like the Poreč theatre, built in 1887, and the Round Tower – another Venetian defence tower constructed in 1475. We ultimately bade farewell to our third and final coastal town of Istria and walked back to our apartment.

7 thoughts on “Istria: An Evening in Poreč”