The fourth day of our trip was the day when we left the Kinnaur valley behind and finally entered the Spiti Valley. We started the day in Kalpa and ended it in Tabo with a brief halt at Nako. This was the day when we got to witness the landscape for which we had undertaken this trip – stark, rugged, desolate mountains without a shred of vegetation. And what mesmeric sights were those! But let’s start from the beginning.

We woke up to the magical view of the snow covered peaks of Kinner Kailash range glistening in bright sunlight and clear blue sky overhead. We got our breakfast packed from the hotel and left by 7:45 am. The road to Nako was quite poor with there being nothing more than dirt tracks for long stretches. Our journey was also interrupted by frequent halts which we had to make due to road clearance work.

Some 30 km before Nako, NH 5 branches into two parts. The first, NH 505 leads to Nako, while the main highway itself leads towards Shipki La Pass at the Indo-China border. River Sutlej enters India through this pass only. However, entry to the pass is restricted for general public.

We took NH 505 from the diversion and just a few minutes later saw the confluence of Sutlej and Spiti rivers. We stopped here, got down from our traveller and were immediately hit by a strong gust of wind. We spent around 20 minutes there and then continued our journey for Nako.

We had not entered the Spiti Valley yet but that gloriously barren landscape had already made an appearance. We drove towards Nako admiring the spectacular views. The final stretch to Nako consisted of a steep ascent which involved climbing a road with many tight hairpin bends or kazigs as it is locally known. We eventually reached Nako at 1:30 pm. A journey shown to be of the duration of 3.5 hours on Google maps (four hours considering our stop at the Sutlej-Spiti confluence) ultimately took us almost 6 hours.

The village of Nako is famous for two landmarks – a Lake and a 1000 year old monastery.It was the latter that we visited first. The monastery was a part of a large complex which consisted of some new constructions along with some ancient ones.The first thing we saw as we got down from our vehicle was an intense game of volleyball being played by the locals next to two stupas which must be hundreds of years old amidst a stunning mountainous backdrop. It’s not a scene you get to see very often. We walked past the makeshift volleyball court and entered the main gate of the monastery.

The monastery area consisted of a few ancient temples and other buildings. Just inside the main gate was an information board that explained the significance of all these buildings. The temples were locked when we reached but a monk quickly arrived and unlocked them. We saw two temples from inside which consisted of some nice frescoes and sculptures related to Buddhism. There was another small white temple which had the remains of some intricate carvings on its wooden door frame. The paintings, sculptures and carvings were not breath-taking and indeed looked in need of significant restoration but it still felt gratifying to see a different culture in such a remote part of India.

From the monastery we drove to the village where we bought a few souvenirs from the market and then set off towards Nako Lake on foot. After covering almost half the journey we met a few groups of people who were coming back from the lake, all grumbling about how it was such a let-down and a waste of time. We were tired and already had a hike to a lake scheduled for the next day hence we decided to give the Nako Lake a miss and returned back to the market where we had a late lunch. While waiting for our lunch we met a 50 something French guy who was cycling all the way to Spiti. Our conversation was pretty limited since he didn’t speak much English but we came away from the meeting in renewed awe of the general fitness of Europeans.

We left the village of Nako by 4 pm with Tabo being our final destination of the day. At around 6 pm we reached Sumdo, where a checkpoint marked the end of Kinnaur and the beginning of Spiti. Finally we had entered the Spiti valley. Just a few kilometres ahead of Sumdo, there was a diversion marked by a colourful gate that leads to Gue village (9 km from the diversion). This village is famous for a 500 year old mummy of a monk. Gue village was initially a part of our itinerary but in the end we skipped it as the detour would have meant an extra 90 minutes at least. We continued towards Tabo and reached our destination by 7:30 pm. The road was good in parts especially the stretch towards the end. 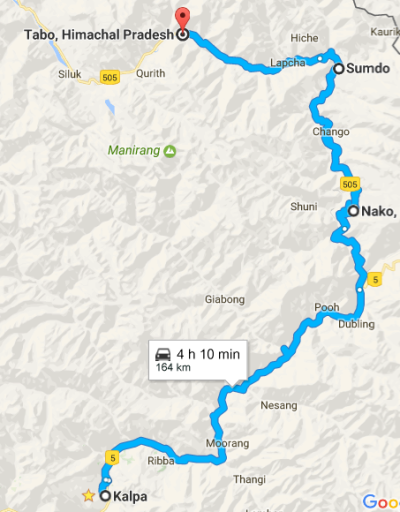 Tabo is a place someone can easily fall in love with – a quaint, peaceful village in the middle of nowhere.

Our hotel – Tow Dhey Himalaya – was situated right beside the highway and was the best hotel of our trip till now. We had booked three double rooms for a total cost of Rs. 5000. It was dark by the time we settled in our rooms hence the task of exploring the village was pushed to next day.

I had learnt in geography classes about the cold mountainous deserts but as I sat in the balcony of our room looking at the huge, imposing, rugged mountains right across the village, it was for the first time that I understood what that term meant. I understood the harshness of life in such a terrain. I also understood that mountains may not be always welcoming but to those who dare, they are always rewarding.

4 thoughts on “Entering the Spiti Valley”